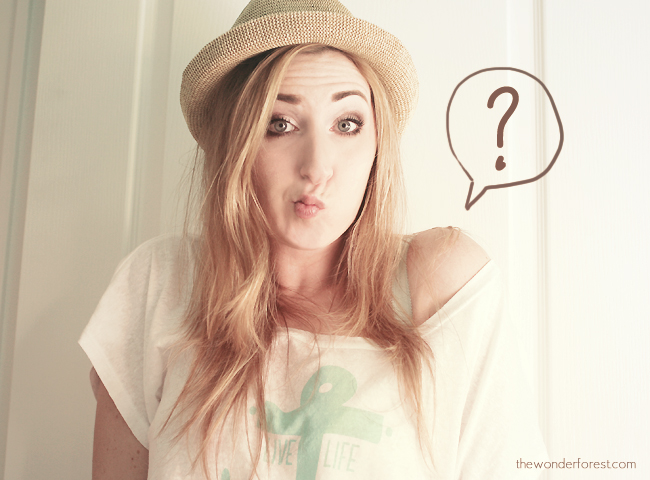 I’m writing this in response to some comments from readers of my book, Blog Wonderful, who asked how I deal with negativity in the blogging world. I wrote that book before I had my own negative experiences, so wanted to expand on it here.

For the past (almost) year and a half of my public Wonder Forest blogging life, I managed to slide on by the naysayers and negative trolls of the internet.  It wasn’t until a few months ago that I had a taste of that hate for myself, and I’d be lying if I said it didn’t get under my skin at the time. I was a bully-less blogger, but when I started this journey I knew that it would be inevitable eventually. I had seen other bloggers and friends ridiculed in the past and knew that one day my turn would come if I kept running this joint.

And one day, there it was. The little 40 hits notice on my Google Analytics dashboard staring straight back at me from a site that appeared to have something to say about me. Naturally, I clicked the source link to see where this traffic was coming from and was greeted with about a handful of people who had nothing better to do than tear me down.

As I read through their discussion, tired and wishing I had just gone to bed (I believe it was around 1am), I had moments of “wtf?”, followed by a bit of laughter, followed by that jumbled gut feeling we all get when someone hates on us. The only other time I felt that feeling was in high school, when this big nasty girl decided she didn’t like me because I became BFFs with the guy she liked. Aside from comments about me being “too skinny“, I’d never really been bullied or picked on growing up because I was generally nice to everybody.  So you can imagine my shock to find grown up girls talking about somebody in such a negative way.

The thing that baffled me the most was that a lot of the reasons these girls trolls disliked me weren’t even real. It’s funny how some people can form opinions about you entirely based on how they interpret words or pictures on a screen. It’s even more shocking when they start fabricating stories about you. I seriously have no idea where some of the tales came from, but let me tell you it opened my eyes. I thought about this type of thing magnified a hundred times and realized that celebrities have to deal with that stuff every single day, when in reality they are just people. I actually stopped believing anything I read in gossip magazines after this experience… which sounds a little over the top, but I didn’t want to be like these internet girls… people who judge and make up stories based on nothing. So I started really questioning the validity of gossip. The last thing I wanted to be was like them.

Besides the random stories, I remember them talking badly about me because I have goals. Um what?  If that isn’t the most bogus thing to hate someone for I don’t know what is. They even went on about physical characteristics, as if I wasn’t already aware of what flaws I have! As if these things actually mattered somehow! I’m already my own worst critic and am able to find humor in my flaws. I could win at that game any day.

Being a person who doesn’t really sit back and take a beating (Aries alert…), I responded to their crap with a page of notes and truths so they could get their story straight and signed off for the night… half asleep and wondering what must have happened in their lives to be so full of hate. If I had actually done something to a person to warrant this hate, I’d rather them tell me personally so I could make it right. As far as I knew, that wasn’t the case.

What happened after that? I have no idea, honestly. I didn’t look. I didn’t feel like there was anything left to explain and I sure wasn’t going to have an ongoing defense session with a random internet troll or two. If they weren’t interested in actually getting to know the real me, then it would be near impossible to try to change their opinion anyways.  So even though I still occasionally see a couple hits from that same website pop up in my Analytics every now and then, I refuse to click the link to see what else they have to say about me. What would be the point?

So what do you do if you become the center of a middle school bully circle? You keep being you. You realize that there are like 7 billion people in the world and not all of them are going to like you. There is no possible way that you can have everybody like you (sorry, perfectionists!)… and that is OKAY!  I am totally fine with that. What they say about you can be cruel, but you shouldn’t take it to heart. You should realize that those people who don’t like you don’t need to matter to you. They don’t mean anything to you. They are a dot among 7 billion others. You will probably never even meet the people who berate you on the internet, so why should they matter at all? Your personal lives will never affect one another.  They will never get to know who you are in real life, and that, for them, is a shame.

So yeah, it is like a kick in the stomach when you discover that somebody’s openly talking badly about you, and like I said it did hurt a bit at the time, but you move on. And maybe that’s the difference between you and them… You move on while they stay in their internet bubble, finding mean things to say, day after day… and you can’t help but feel a little sorry for them when you picture them anxiously scouring your blog for tidbits to use for their gossip sessions. Like this post.

If you’re dealing with mean people, on the internet or in real life, please don’t let them get to you. You are so much better than that.

(google reader is going away. follow me on bloglovin’ to stay updated!)