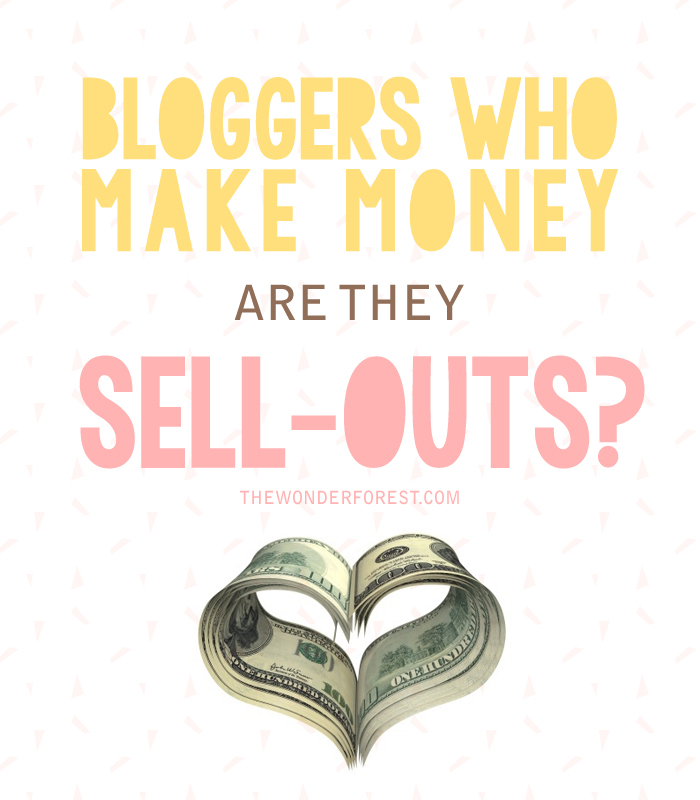 I haven’t been able to just sit down and write out some thoughts for a while, but something has been on my mind lately and after I read Can Full-time Bloggers Live Off of Rainbows + Hugs? by Holly last night, it struck a chord with me and I wanted to share it.

In it, she talks about how she’s been criticized for making money with her blog and making it more like a business than a hobby. She shares a comment from a reader who is fed up with her “selling, selling and more selling” as well as a reply from her husband which contains a ton of great points. I wanted to chime in on this as well because I too have received the same types of comments in the past along the lines of “you’re always talking about money/trying to sell something” or my favourite, “why do you include affiliate links in your posts? Do you really need the money that badly?” (yes, that was an actual comment).

As somebody who helps other bloggers and business owners generate income from their sites, and who has been doing this since before I even started blogging myself, it’s tough to sit here and listen to those types of people express those types of opinions. It’s frustrating to have to explain that, no, I don’t “need the money that badly” (as if I am trying to swindle them) and instead have them understand that this is my job. It’s tough to have to justify yourself for promoting your own content or products because a huge part of actually making that product a success (after all of the hard work you’ve put into it) is promotion.

Much like Holly, I’ve been criticized before for doing “too many things”. Multiple blogs, apps, books, e-books, and online shops to name a few. On one hand I can understand why this might annoy some people who don’t quite grasp that creating online products is what I do and always have done before anyone knew who I was… but heaven forbid I actually share those ventures with my readers… my main source of traffic! On the other hand, there’s a whole side that they aren’t seeing: The effort and time it takes to create these things, the actual desire to branch out from a single blog and make a living from it. And people… making a living online is not wrong.

I think that more of us need to stand up and reinforce that making money from your blog is not a bad thing! Which is exactly why I wanted to post this. Bloggers provide their visitors with countless pages of entertainment/tips/education and I think that once they’ve established themselves as someone who knows what they’re doing, there is absolutely no reason that they should be doing this for free! Yet the moment they add an affiliate link to something they took the time to recommend, or come out with an e-book… they’re a sell out?  It doesn’t make any sense!

“No one would ever accuse me of selling, selling, selling or losing my magic touch because I charge for what I write. In fact, if publishers would expect me to write for free I’d complain, probably loudly, on the web. Many people would come to my aid denouncing the “evil” publishers, those “greedy bastards”, the “disgusting freeloaders”. I expect to be paid for my hard work, everyone does.

Yet somehow bloggers have no right to that. They are expected to publish content for free. They are expected to do it out of the goodness of their hearts. They are expected to be magical creatures apparently living off of rainbows and hugs. Dare I say this holds true mostly for female bloggers. The moment a female blogger tries to find forms of compensation for her hard work she is chastised by a good percentage of her gender. She’s selling out. On the other hand if I, as a man, were to start a tech blog, had ads from major sponsors, wrote tech books, went on paid speaking assignments, did consultations etc. I’d be considered a successful man. Seth Godin comes to mind, also Darren Rowse of ProBlogger. It speaks for the still pitiful state of female empowerment in our day and age, the biggest opponents being other females.”

Being that Seth Godin and Darren Rowse are two people I have looked up to for a long time and have accomplished things that I can only hope to accomplish one day, I was happy to see the comparison made here and a point that I hadn’t even considered before. Why do we, as female bloggers, not attract the same respect as those men who are doing the same thing?

This attitude needs an adjustment. You wrote an e-book? I think that’s amazing! You’re branching out and offering services to your readers? Work it, sister! Let’s support one another instead of rolling our eyes whenever one of us launches something new. The fact that we can actually do things like this and make a living from it is an incredible thing, not something that should be shunned or disrespected. What is it about a blogger promoting herself that you don’t like? Her method of promotion? The fact that she’s able to make money from something she’s done all on her own? Your own ego feeling hurt in some way? Think about it. If you see an affiliate link to something you are interested in, don’t avoid clicking it just because you don’t want to give credit to that blogger. Or if you enjoyed a post and you think someone else might enjoy it too, share it! I think that’s more than fair, don’t you?

Now without being totally one-sided here, I do think that there are the occasional bloggers who go a little overboard while trying to generate income. The ones who start up a blog solely for the purpose of making money without putting in the actual work or great content to make it happen. They slap ads all over their blogs or create sponsored content more often than their own. They haven’t learned a cardinal rule of blogging: if it doesn’t fit, don’t post it.

Is there a line you can cross as a blogger? Definitely. When you find yourself accepting sponsored content that doesn’t mesh well with your site, or promoting things you haven’t personally tried or love, I think it’s time to take a step back and re-evaluate better ways to earn your income online.

For me, I am going to keep creating things and growing my online business, naysayers or not. It is, of course, what I do — and if I can encourage you to do the same and build your own life that you love, or at least support others who wish to do so, then a huge part of my mission is fulfilled.

What do you think? Does it annoy you when bloggers have sponsored posts, advertisers, or promote their own content? Why?

I really encourage you to read Holly’s post for more insight on this topic.