I ran into a dilemma last week.  I was completely out of a specific colour of craft buttons and I needed some ASAP!  After frantically searching the internet for the exact same buttons (same size, same colour, same shape) I came out empty handed.

I was at my wits end when I decided that the only route to take would be to dye some existing buttons I had in a different colour that were the exact same shape and size.

After doing some research, I found out that RIT dye was pretty much the only dye that would work on plastic buttons properly.

As luck would have it, they didn’t have the colour I needed, but I managed to grab a couple of alternate colours to mix.

When I got home I started my button dyeing project.

Before I begin my little tutorial though, I wanted to explain some things I learned as I was attempting this.

The directions I was following said to mix the dye with hot water and let the buttons sit in it for 2 to 5 minutes.  So I did this. And nothing really happened.

The buttons changed colour only slightly and after about 5 attempts with different dye-to-water ratios, I was about to call it a bust.

That’s when I started thinking about the “hot water” step.  There was some reason that the water had to be hot… so I started over with the goal of making the solution BOILING HOT and keeping it that way until the buttons were done. Well, guess what… it WORKED AMAZINGLY!  On to the tutorial…

How to dye craft plastic buttons

Prepare your area with newspaper because things are gonna get messy!  Wear some rubber gloves to protect your hands.  Then grab some white or lightly coloured buttons. Mine were a very light pink: 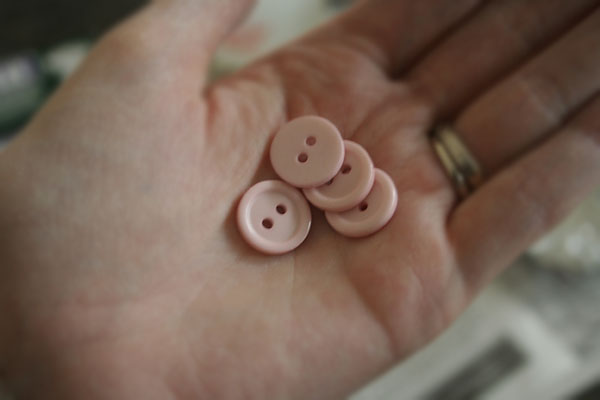 Step Two
Line a bowl or a mug with tinfoil.  Use a dish that you don’t care about, because it WILL get dye on it. Unfortunately there was little way around this even when lined with tinfoil.  I decided to use tinfoil to help “trap” the heat. 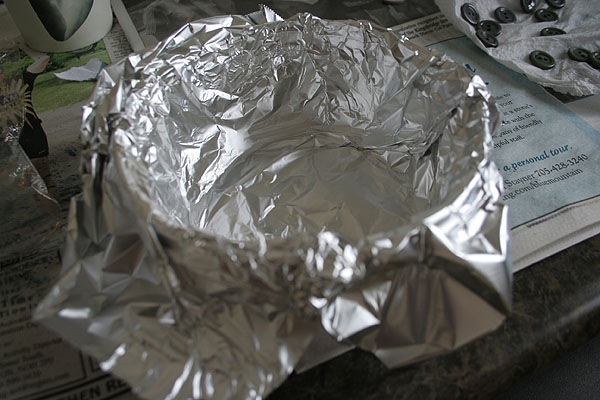 Step Three
Take a plastic microwaveable bowl and fill it with water.  Pop it into the microwave for about 2 minutes or until you can actually see it boiling.  This is SO important that you have the hottest water! Be careful taking it out! 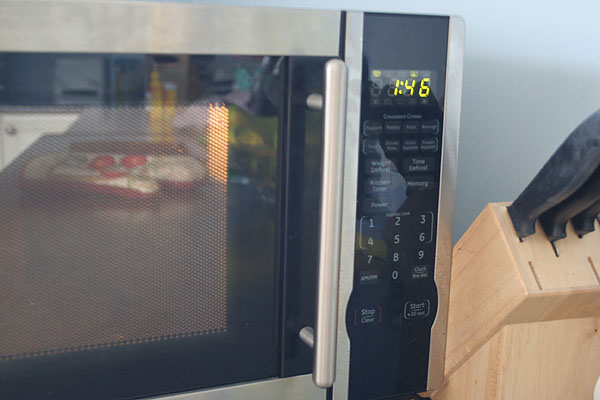 Step Four
Grab your Rit dye!  Pour the boiling water into your tinfoil lined mug or dish.  Add your dye.  I used about a tablespoon for a mug full of water.  Your buttons will be darker if you add more dye, or lighter if you add more water.  I used green and navy dyes to make a dark teal shade. 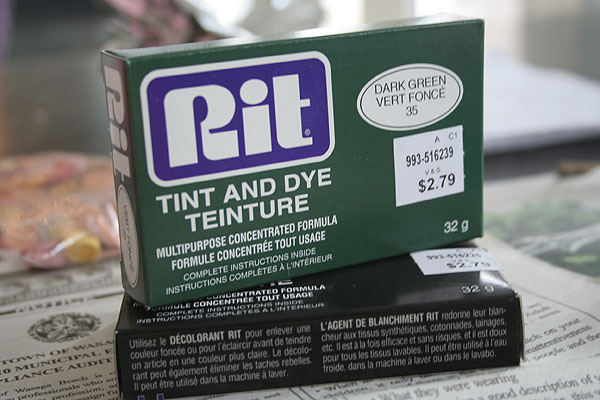 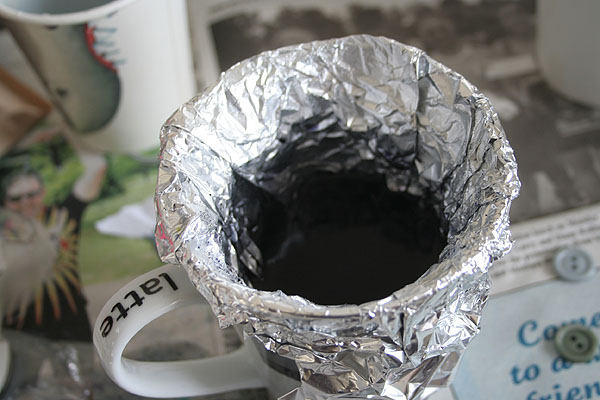 Step Five
Add your buttons to the mix, and stir! If you can, try to keep the buttons separated because I noticed that if you have a lot of buttons in there at once, and they clump together, you get weird un-dyed bits of patterns on some of them. 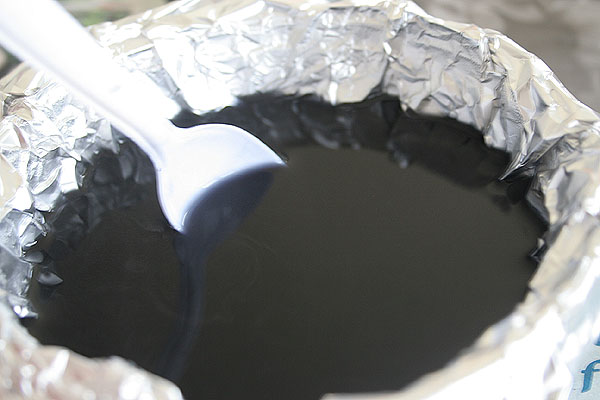 Step Six
Cover your boiling hot mug or dish with another piece of tinfoil.  I did this to “trap” in the heat.  Leave the buttons for a few minutes, stirring occasionally to mix them around a bit. 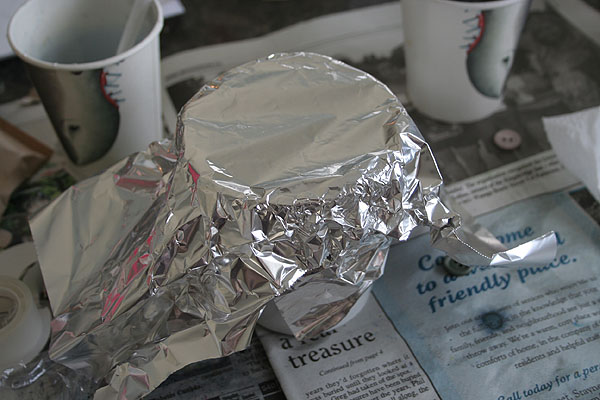 Step Seven
When they get to a shade you like, pull them out with a plastic spoon!  Rinse them all off under cold water with a little dish soap. 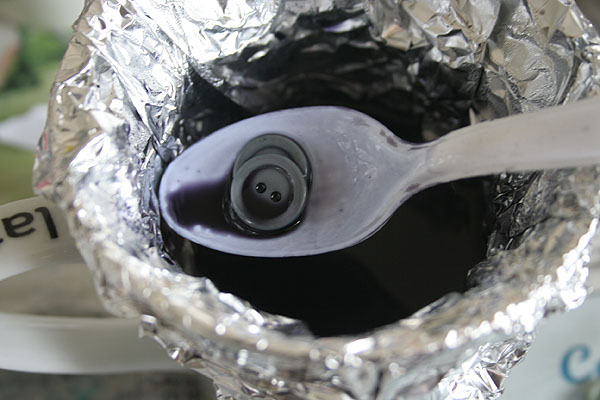 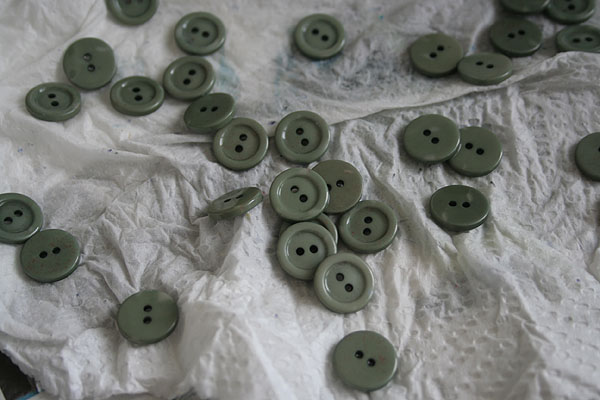 VOILA!
New buttons!!  Give it a try and let me know if it worked for you!

Just remember: heat is the key!  I would have tried this on the stove in a pot if I wasn’t so scared of ruining everything with dye, but the tinfoil definitely helped hold the heat! 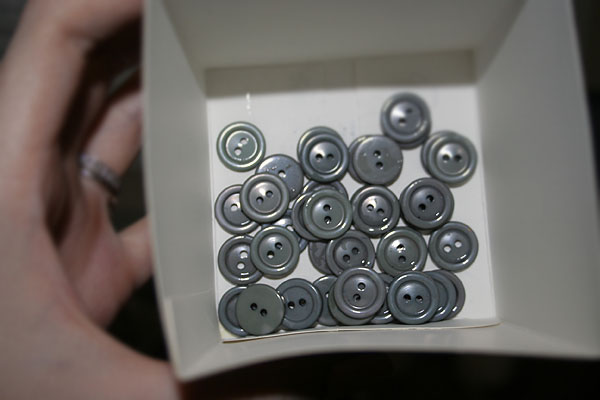 Pin this for later: