When high school was finally through, my initial idea was to take a year off and think about college later. I absolutely couldn’t wait to finish high school and couldn’t even dream of going back to another learning facility for another four years.

I already had a job working at Subway… pretty much the only workable place in my town at the time… and though I didn’t see my career as a “Sandwich Artist” being anything spectacular, it was good enough for now and provided me with the little cash I needed.

During my time there, a regular customer and brother of a friend of my brother’s (still with me?) and I got talking about my web and graphic design “background”. He was a web developer but wasn’t so savvy with the designing aspect so he asked if I might be interested in doing a little work for him. I said yes obviously, and the first job he gave me was creating a logo for a jewelry company. I took my time on it and used all of my most newly learned skills. I emailed the finished product, and was ecstatic when he came into the sandwich joint the next day.

“You designed that?!” He said. “It’s incredible, where did you learn how to do that?!”  He made me smile from ear to ear and was so overjoyed with what I gave him that he started using me for his client’s work on a regular basis.

At that time, I created my own online portfolio and web design site. It was called Envy Studios and looked like this: 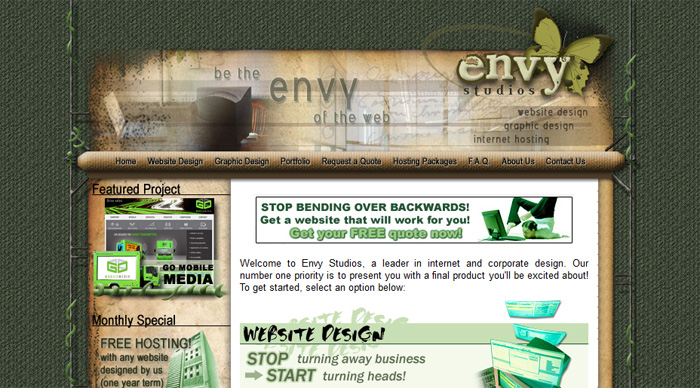 This story wouldn’t really go anywhere if I didn’t talk about a person that I don’t want to talk about.  However, I’m giving you the full path of my career, so I must.

Still being the band-loving now-19 year old that I was, I attended a special event at a bar with a friend. There, I met a guy. Let’s call him Jacob because I hate the sound of his real name… and because he still stalks me to this day and I wouldn’t be surprised if he somehow found my blog and is reading this. Anyways, Jacob and I started talking about work, and mentioned that he was a website designer and had his own company. “I do that too!” I told him. How strange, I thought this must have been fate.

Jacob and I hit it off, and we started dating. He was my first “real” relationship… although I hate to call it that now because looking back it’s not how a relationship should have been. Thanks to Dustin I know now what a “real” relationship is.  I was still working at Subway at this time and would drive 45 minutes to his house whenever I could. He had his “office” set up in his basement and I got to see how he ran his web design business first hand. His design style was more corporate and sporty, and mine was the complete opposite.  He wanted to get me to be more involved with his business so suggested I try some phone calls to clients. He must have been crazy. I hate the phone call side of business so much. I had no idea what to say to these people and he expected me to be able to recruit them and ask important questions. My first call was a mess. I was SO unprofessional and think I ended up passing the phone back to him.

Slowly, from watching him, I learned what questions to ask on the phone and how to write great emails, make invoices, proposals, and other office-type stuff. I was still doing my own design work on the side, but I wanted MORE! I wanted an actual corporate client. I decided to put a link to Jacob’s web design business at the bottom of some of my own previously created websites.  In doing that, I received my first legit client. She called his business line and specifically asked for “The girl who did ____’s website”. That was me!  Yippee!  I just so happened to be there, so I answered her call and started talking about her needs. She owned an entertainment business that specialized in celebrity impersonators. Long story short, she hired me, I built her website, logo, and branding, and she is still one of my top on-going clients… nearly 10 years later.

It felt great to land a great client all by myself. I began taking things more seriously and really learning about programs, coding, and techniques. I was at a point where I wanted to quit my day job and just concentrate on web design completely, but I knew it was a little unrealistic to do that just yet. So, I would work during the day, come home, and work on web stuff until about 3:00am… until one day I got a call from a friend that really sparked my interest and could have possibly been just the ticket I was looking for…

What was your job after high school?