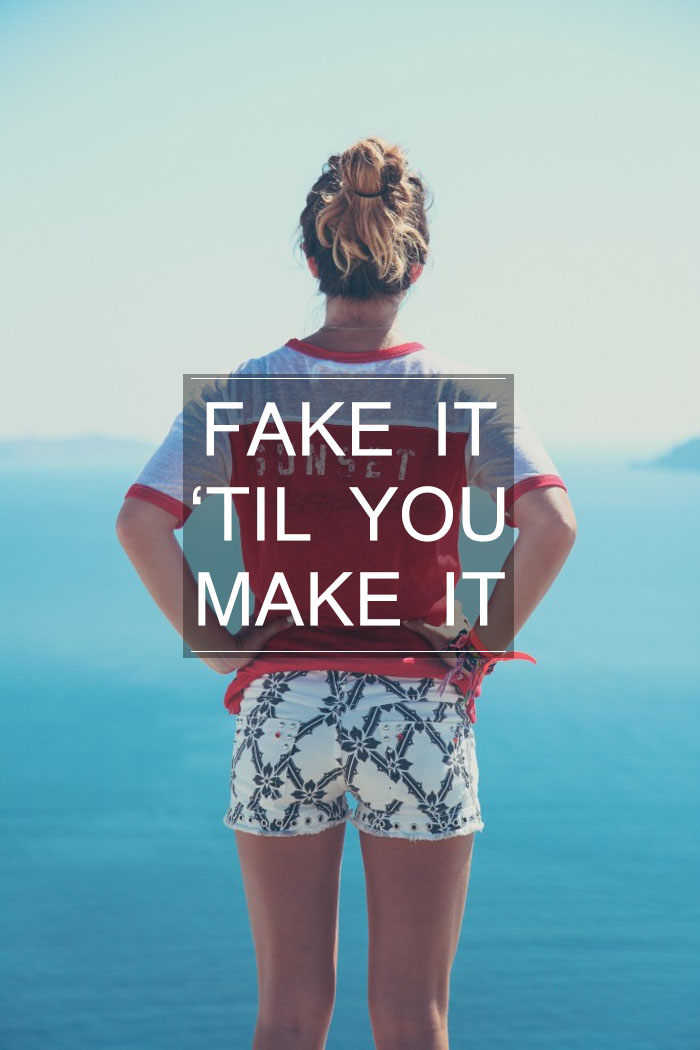 We’ve all heard the phrase before, “Fake it ‘til you make it” but is this good advice?

My answer to that is yes! Here are three ways you can appear to have it more together than you really do while boosting your image.

Early in my career, at my very first job after college, I made friends with a group of young professionals at work. We were all fresh-faced and eager to get into the working world. We all wore suits and presented ourselves very well (hey, we were in sales) but one co-worker always stood out; he was sharp. He wore three-piece suits often and paid attention to every last detail in his wardrobe. If you didn’t know any better, you’d think he was very successful but the truth was, mostly, he looked the part. Unsurprisingly, he was consistently one of the top sales people month after month. While I don’t think he was more knowledgeable than anybody else, I can’t help but think that the way he dressed helped his sales. He portrayed an image that he knew what he was talking about. You knew he meant business just by the way he dressed.

Being well dressed doesn’t have to be a daunting task and it doesn’t have to make a dent in your wallet either. Try investing in quality pieces that you know will not only look great on you but that can also make a statement; a tailored blazer, a fitted dress and some leather pumps are examples of pieces that will never go out of style and you can mix and match with other pieces in your wardrobe.

You’ll notice that as soon as you start dressing better, you feel better. You stand up straighter and walk with a little pep in your step. There’s no doubt about it, the way you dress will set the tone with how others treat you. So, if you want to be a boss, simply put on your “costume” and dress like one.

Do you ever talk to someone and realize that they’re going through a lot of stuff, whether professionally or in their personal lives, but you would never know it? Those people have mastered the art of faking it. Yes, instead of walking around with a cloud over their heads, they’re choosing to convey something else. I firmly believe that happiness is a choice.

Whenever you’re feeling insecure or lacking confidence in yourself, give yourself a pep talk. Try focusing on the outcome, not on your lack of skills or whatever is getting you down. What do you bring to the table that perhaps others don’t? Focus on sharpening those skills because that’s exactly how you build your confidence.

Recently, a friend of mine was telling me about a recent interview she had with a great company. It was practically a dream job for her so she was extremely excited and determined to shine for the employer. Her interview went well but she grew anxious when the interviewer mentioned a particular software program that she had not used in years. Although she wasn’t asked about her knowledge about that program, she was pretty sure it would come up again. Instead of bringing attention to the fact that she didn’t have those skills, she decided to go home and learn everything she could about it. She looked up several YouTube tutorials on the program and taught herself as much as she could. Now, I would never advise lying during a job interview or application process; people get turned away for misleading potential employers, however, I admire the fact that while she wasn’t a subject-matter expert, she went and did her homework. No one had to know that she was faking it, she was up for the challenge and she later found out that she got the job.

Have you ever faked it?

Angelica is a human resources manager and recruiter who has been working in the corporate and creative fields for over 8 years. She writes about parenting and personal development on her blog, Not Without My Coffee.

View all of Angelica Sereda's posts.