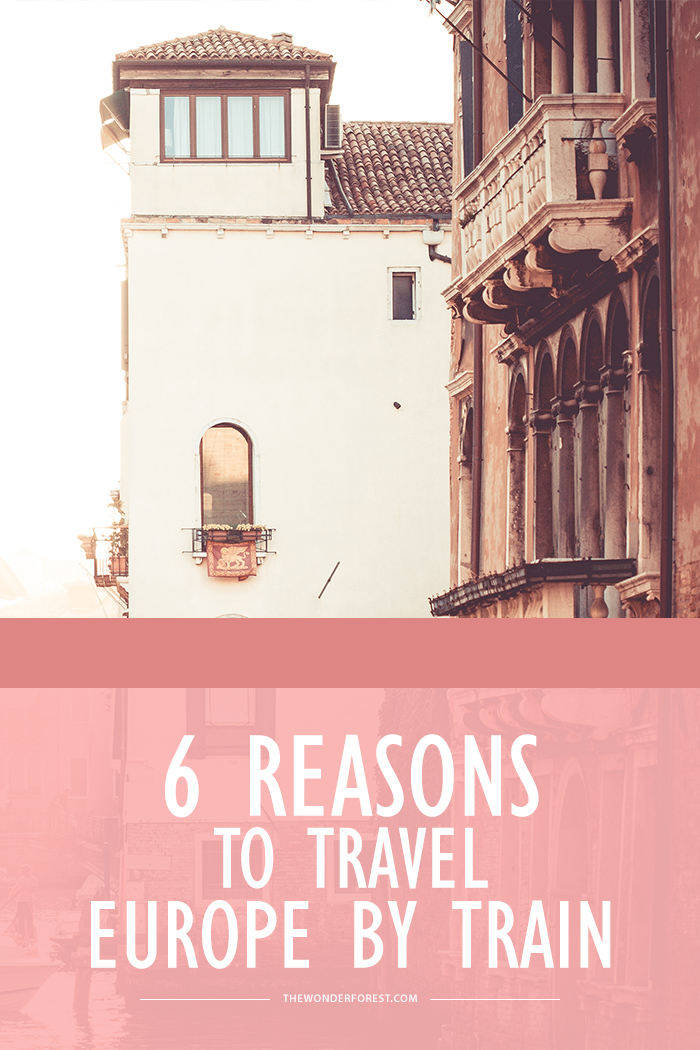 Europeans really have it made. High speed trains, night trains, luxury trains, you name it. Who would want to fly when the railway is so smooth and affordable?

The fact that you can get from London, underwater, to Paris astonishes me. How cool! And then once you’re officially in the EU you can train anywhere from France to Turkey. The Eurail Pass allows for 10 travel days for only $500! I can’t even get a flight from Edmonton to Toronto for less than $600 and that’s about the same distance as Paris to Istanbul. Crazy.

In Canada we do not have a smooth train system like the Europeans do. Europeans can pop on a train to visit a neighbouring city and not have to worry about making it to the train station an hour before hand, shuffle through security and then have to worry about baggage fees. They just grab their suitcase and enjoy the ride! Here’s 6 reasons why while in Europe, you should do as the Europeans do and travel by train.

It’s about 59 Euro to get from Paris to Barcelona. While you could find flights for cheaper you would have to book way in advance. And if you missed your flight that could leave you with a large cost where if you missed a train you just hop on the next one. With trains, there is no check in, no security, and no dumping out your water bottles or peanut butter like I once had too (sad day). All you have to do is bring your luggage and some snacks!

The Scenery is Breathtaking

I will never forget travelling from Munich to Vienna and going through the Austrian Alps by train. I saw small villages scattered outside your window and a soft fog that had come down from the mountains. On another train ride from Prague to Munich, I was in awe of the Bavarian Forest and was sure that must be where Red Riding Hood lives. When you travel on train, you pass through areas blanketed in snow and others still stuck back in time in autumn. You definitely can’t see all this beauty from a plane.

I have had very little problems with the European trains, except for one time in Nuremberg when I realized there were no train times anywhere, so I was frantically running around trying to find my platform. Luckily I saw a girl staring at the wall and had the smarts to realize there was a time table printed out in teeny tiny letters. Trains are on time and are very rarely interfered by weather.

The Bar Cart is Amazing

Ahem, snack cart…Unlike planes, you have the freedom to walk around and make your way to the bar cart of the train, where you can have access to some small snacks, alcohol, etc. If you are in First Class you are usually served a complimentary meal/snack and drink alongside free WiFi and power outlets. These amenities are amazing if you have an 8 hour train ride and want to get some work done or message your friends and family back home.

Have you ever just wanted to run away to another place on a whim? The hardest part about flying is you have to book your return flight right then and there or you will be paying the same amount for a one way flight. With Europe’s trains you don’t have to plan your trip. You can decide you want to leave one day and figure out if you want to come back later. Trains stop at central locations and from there you have the choice to branch out to smaller locations, giving you total freedom.

One of my favourite things about travelling Europe by train is that you travelling alongside all sorts of people and languages. To date, one of the best train moments was when I was travelling to Vienna and there was a man in his mid thirties with his mom sitting across from me and my boyfriend. His bag of candy popped and he handed one to his mom and then pointed the bag towards us with a shy, “Ricola?” Just like that we made a friend on the other side of the world.

When you think about all the freedom and memories that come with travelling on train it’s hard to say yes to flights. You can make a spur of the moment decision to travel and hop off at any city. It’s quite the adventure to travel by train. So what would you prefer – train or plane?

Hi, I’m Shelby! I am a writer, artist and traveller from Canada with a never ending thirst for new experiences and adventures. My favourite things are smoothies, photography, plane tickets and a good cup of coffee. When I’m not writing for my travel and lifestyle blog called The Fernweh Wolf, you can find me doodling or planning my next adventure!

View all of Shelby Rae's posts.