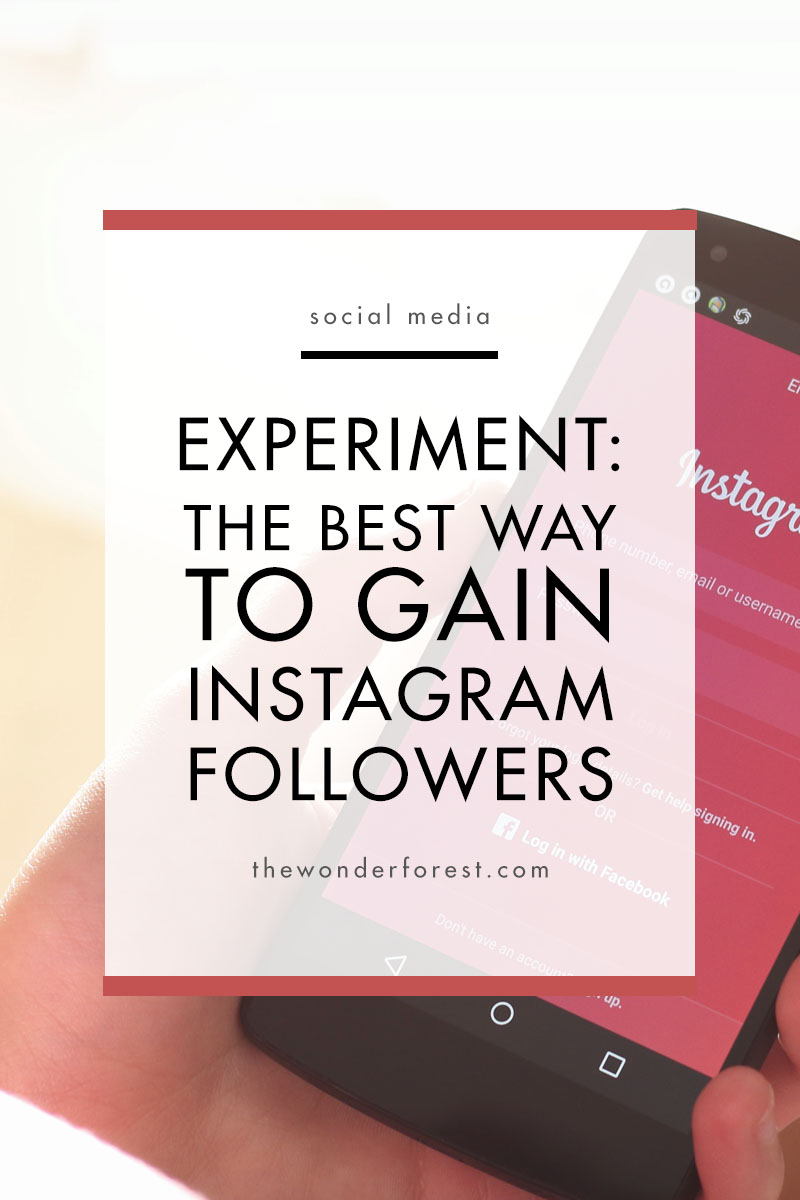 Instagram followers. Everybody wants more, but few understand how to obtain them organically.

Whether you’re a brand, business, individual, or blogger, using Instagram can be a really lucrative way to get yourself out there and attract like minded people.

With over 700 million users, Instagram has become the hub of social interaction.

Curious about organic growth, I wanted to see if there was a “formula” for attracting more followers, so I lined up a few volunteers to help me with a little Instagram experiment.

The experiment consisted of 60 Instagram users who were split up into groups of 10. Each group had a specific task that they were to complete for an entire week. The volunteers I chose per group had a wide range of existing followers – some accounts were just starting out, and others had thousands of fans already. I did my very best to make each group inclusive of all types of accounts so that the results wouldn’t be shifted.  They were asked to report their starting follower count and their final follower count once the week was complete.

Their tasks were as follows:

Group 1A
Asked to like 200-250 photos daily from a specific hashtag of their choosing. The hashtag was to correspond with the photos they posted.  They were asked to refrain from using any hashtags on their own photos for the course of the week.

Group 1B
Asked to like 200-250 photos daily from a specific hashtag of their choosing. The hashtag was to correspond with the photos they posted.  They were asked to refrain from using any hashtags on their own photos for the course of the week. The only difference here was that these accounts in the group all had more of a themed aesthetic than the previous. For example, some were entirely food accounts, others were hair or fashion exclusively.  I was curious to see if a themed account could gain more attention this way.

Group 2
Asked to like 200-250 photos per day from followers of users who have accounts similar to theirs. They were also asked to only like the user’s most recent photo and to refrain from using any hashtags on their own photos for the week.

Group 3
Asked to like 200-250 photos per day from followers of users who have similar accounts to theirs. They were asked to like their THREE most recent photos (3 photos per user) and also asked to refrain from using hashtags on their own photos for the week.

Group 4
Asked to post a new photo every day for the week and use specifically THREE hashtags relevant to their photo. The hashtags they used were to have less than 1 million photos posted under it. They were asked to refrain from any mass liking or following for the week.

Group 5
Asked to post a new photo every day for the week and use specifically SIX hashtags relevant to their photo. The hashtags they used were to have less than 1 million photos posted under it. They were asked to refrain from any mass liking or following for the week.

The plan with this experiment was to see if liking photos and using hashtags actually worked for gaining followers, and if so, did it matter how many hashtags were used or if their “liking” was towards similar accounts?

Here are the results from that week-long experiment. The percentages represent the average increase of followers experienced by each group over the course of one week:

As it turned out, There was only a very slight difference between Group 1A and Group 1B, concluding that it didn’t matter whether or not the volunteer’s Instagram feed was themed or based around a niche.  These groups also saw the highest increase of followers.

Group 2 saw an average follower increase of 9.6%, concluding that photos liked from hashtags were more effective than liking the most recent photo of a follower from a similar user/account.

Group 3 saw a slightly greater increase after liking the 3 most recent photos from followers of similar users, instead of just the one most recent.

Group 4 did not impress at all, being the lowest increase of the bunch, and Group 5 earned 2nd last place, concluding that hashtags added to your photos don’t gain as much attention as if you were to physically make yourself visible to others by liking their photos as well.

The takeaway from this experiment was that it takes a bit of extra work to increase a social media following. There are no “quick fix” hashtags that will instantly boost your presence without putting in a little elbow grease of your own. Liking (and even commenting) on photos from other users creates much more of a connection than simply plastering hashtags on your photographs and waiting for others to find you.

I did also notice that the users who had more appealing photographs in their accounts gained the most fans over the course of the week, reiterating that making your Instagram profile a nice looking place does help in attracting new followers.

What You Can Do

While hashtags do help, I always recommend using ones that have less than 500,000 posts under them. Otherwise, the chances of your photo going unrecognized greatly increases as those hashtag results are constantly updating which results in your post getting pushed down every second.

If you want to grow your Instagram following organically, put in a little bit of time each day and explore the community. “Like” photos and comment on ones that you find appealing. The more you can get yourself noticed without being spammy, the greater your chances are of increasing your followers and attracting people who are actually interested in what you post.

Good luck! What did you take away from this experiment?

Thank you so much to all of the volunteers who shared their time for this experiment. 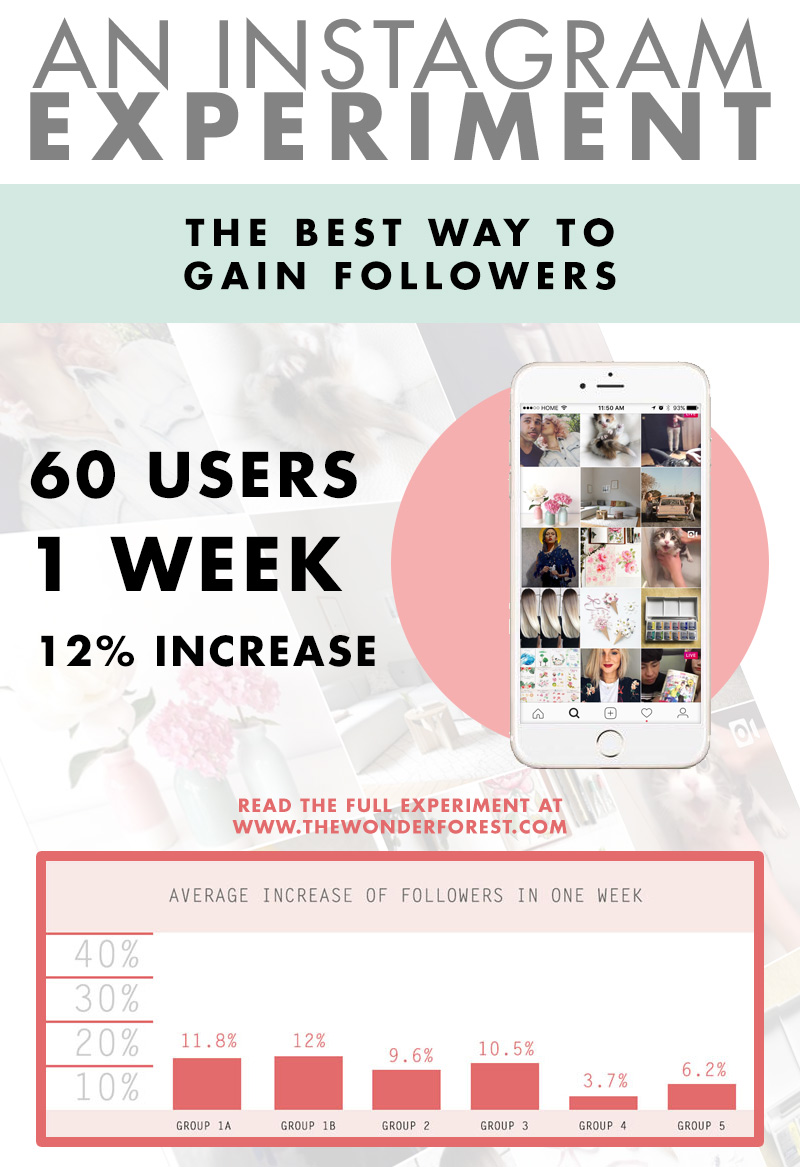