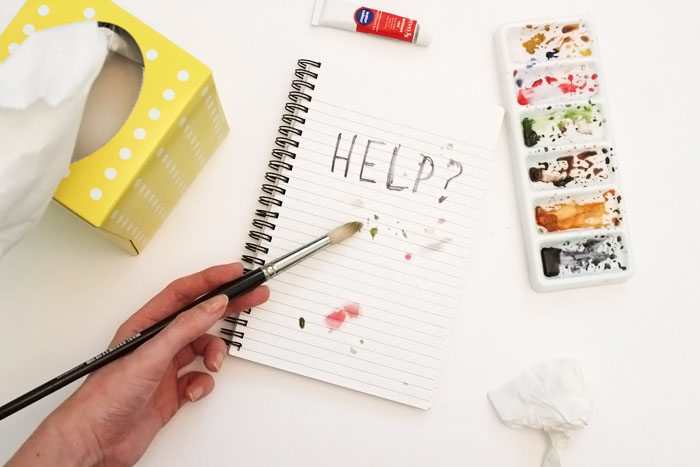 Hellooo my lovely forest friends! Happy October! I am feeling pretty good lately, and that is because I finally got enough courage to visit the doctor and get some help for this anxiety of mine. This step was only about five years in the making, no big deal or anything… ;).

I had decided a while ago that perhaps I couldn’t manage this on my own and it took me a long time to come around to the idea of even seeing someone about medication. My self help methods weren’t working and I was only getting worse, it seemed. I truly thought this was something that I could manage on my own and when all else failed, I started considering the actual possibilities of it being a brain chemistry thing… and for that, I would need a little help.

I am pretty much an anti-medication type person. I rarely take an Advil if I have a headache unless it becomes absolutely necessary. I don’t smoke or drink either, so this whole idea of putting chemicals into my body just didn’t appeal to me. However, after seeing how much medication has helped a dear friend of mine who also struggles with anxiety, she became my inspiration to get better and turn my thought process around. Watching her change over just the course of a year pushed me to want the same for myself. And so, it had to start with going to the doctor.

Doctors have always been one of my top sources for panic. They are pretty much the root of everything. So you can imagine how difficult it was for me to set up these appointments and get moving. I thought it would be an easy thing to get set up to see somebody, but boy was I wrong.

First, I needed a new doctor in my area since my family doctor is located back in my old home town. I thought that it would be easy to just call them up and have them refer me to a doctor here. Nope, they “don’t do that”. Oh, and while ringing them up they also informed me that my medical records were set to be destroyed because I hadn’t been there in 10 years. Awesome.

I called around town, looking for a doctor. None of the ones here were accepting new patients. If you don’t know what that means, basically in Canada, doctors have a limit or something on how many patients they have and if they aren’t accepting any new ones, you’re out of luck. Lucky me! After that nonsense, I had to sign up for the government’s Health Care Connect program. It’s a program that takes your information and reviews your application for a doctor and if they can, they match you with a doctor in your area. They basically make a spot for you. So after submitting my application all I could do was wait. They called a few days later saying they had matched me with a nurse practitioner in my area. Great!

Before I could see the nurse practitioner, I needed to set up an intake appointment to meet a different nurse who could then send me on my way to my nurse practitioner lady. They only do the intake appointments on Tuesdays and the next one was about a month away. Ugh, awesome. I decided to check their website beforehand and there is where I read something not so great. It said that nurse practitioners are unable to prescribe benzos (what I would need for anxiety). I called them up and asked if this appointment would be a total waste of time and they assured me that if I needed medication, they would refer me over to the actual doctor who can prescribe that. It sounded like I was going to be passed off to a whole bunch of people and I wasn’t looking forward to it at all.

So far this process had taken about a month from the time I decided I needed help, until the time I could actually see somebody. Maybe even longer, I stopped counting. This was starting to really take a toll on me because when somebody with mental issues, depression, etc. decides they want help, they need it ASAP while they are in that mindset or else they will just keep brushing it off. Trust me, this is what I did for years.

To speed things up, I decided to call a walk in clinic to see if they would be able to take me. Their voice recording said straight away that they also can’t prescribe benzos. Awesome. So no point in going there either. My last resort would have been to go to the ER (which apparently is what most people do in Canada because it’s so hard to see a doctor when you need them) only after further research, that would have royally screwed me in the end.

So, I decided to just wait it out since that was my only realistic option… all while thinking about how messed up this health care system is.  We are told constantly that if we suffer with mental illness or depression, we should seek help. There are commercials on the radio and tv saying so, and there is even a mental illness awareness day here encouraging it. You’d think that with all of that talk, it would be easy to actually get that help. IT’S NOT.  The courage it takes to do it isn’t enough. Here I was a month later, still trying to get this help and being passed off from person to person in the process. Someone without as much persistence would have given up already. Like I said, when someone with these issues decides they want help, they need it right away. Why are there not enough available doctors? Why are there not enough doctors able to help with mental illness? Why do we constantly need “referrals” from one person to the next instead of just being able to see the actual person we need to see? Why is the only “emergency” option to go to the hospital and open up a whole slew of other issues (reports that affect your traveling experiences, a crisis on your medical record).  After my experience, I can fully understand why so many people self-medicate themselves or worse, commit suicide. The help is not there when they need it and it’s a huge problem.

Finally, the day came when I was able to do my intake appointment. I was a nervous wreck and luckily Dustin came with me because he surprisingly knew the nurse and did most of the talking for me while I stayed huddled in my chair and tried to stop trembling. The nurse was really nice and set up an appointment just 2 days later with the doctor. So back I went, 2 days later, and came home with some solutions. At last.

That feeling when you know you’ve just accomplished something huge is what keeps me going. He prescribed me with a daily SSRI medication (Cipralex) and another to take as needed for those panic inducing situations (Ativan). I’m on day 5 of the daily ones and the first couple of days were interesting. They make me really tired so I’ve been sleeping a lot during the day which is so unlike me because I absolutely hate naps. Other than that though, everything is fine. The daily ones will take about a month to fully “kick in” so I won’t see the full effects just yet.

It’s taken a really, really long time to get here but I am feeling confident that I am headed in the right place now. Medication is never something that I want to have to “rely” on, but right now I see it as a stepping stone to help me get to where I need to be so that my mind can adapt and not be afraid anymore… because I’ve been afraid for far too long and it’s time to start living.