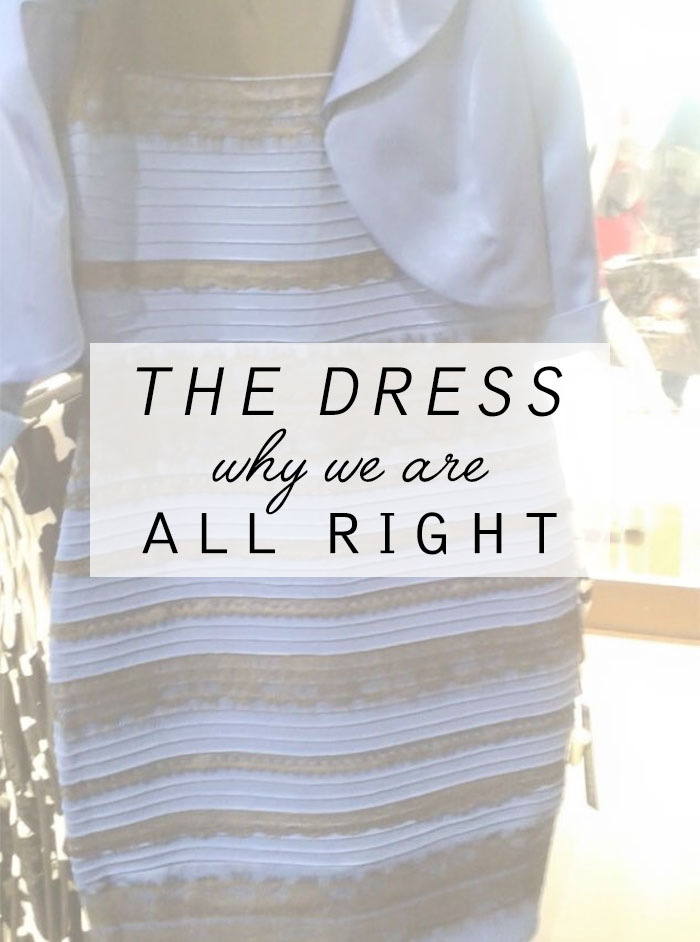 I know you’re probably sick of seeing #TheDress right about now, but I feel the need to talk about it because I’m starting to question my entire design career.

When I saw the now famous Dress pop up in my news feed with a caption saying that the poster saw it as blue and black, I thought he was insane. Was he trolling? It was clearly white and gold. A poorly lit white with a blueish tint, but still white and gold. As I read the comments I became even more confused, much like anyone else in this same predicament. Some people swore they saw black and blue, so I tried my hardest to see what they saw.

I tilted my screen, tried viewing it in different lighting, yet still, that damn dress was definitely gold and (blueish) white. When I showed Dustin and asked him what he saw, actual anger started forming inside of me when HE called ME crazy because it was “absolutely” black and blue. What was happening!?

I started to worry that my eyes were messed up and that perhaps all of the design work I’ve done for my entire life has been perceived differently to different people. What a weird thought! Trying to end this debate, I popped onto Photoshop and swatched the range of colours: 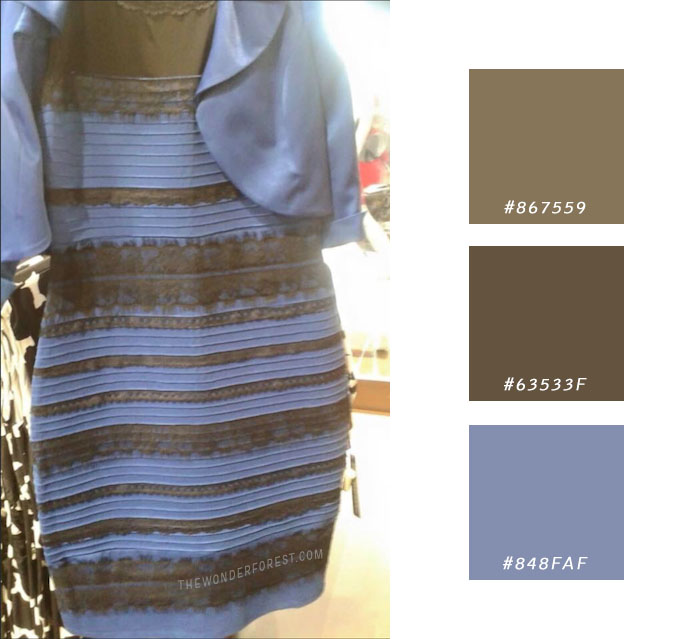 Showing the swatches to Dustin, he still said he saw the gold as a “really dark brown, like black”. With the hex codes in front of me, I was baffled once again. Clearly none were close to a #000000 black, so obviously I couldn’t sleep now.

The internet went a little crazy with 71% of people seeing gold and white, while 29% saw blue and black, according to Buzzfeed’s poll. Finally, the original poster shared an actual photo of the dress being worn, which was, in fact, blue and black. 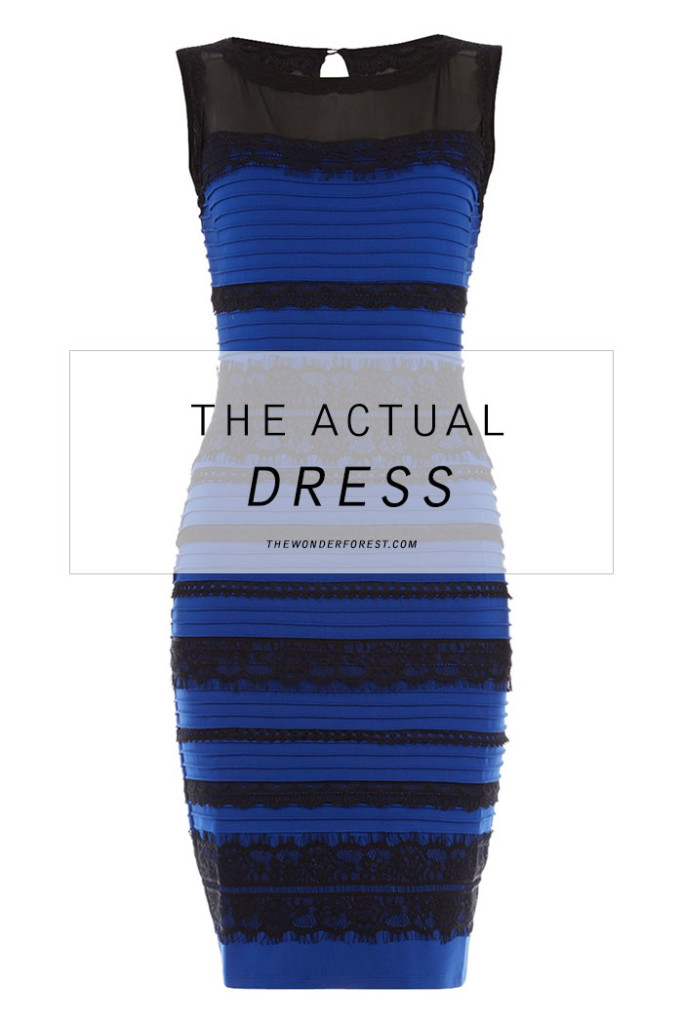 It’s from a shop called Roman, however, it also comes in an ivory and black, so my brain doesn’t want to entirely believe that the photo is of this blue one (even if it is).

So, why are some of us seeing this poorly lit photo differently? I saw many posts about “colour consistency” that explained:

“…because the photo is taken in lighting with a blue hue, it may be causing the blues in the dress to reflect a white color. And while the dress may in fact be blue and black, the lighting does, for some viewers, make it appear to be white and gold.”

and others about our eyes “rods and cones“:

“Your retina is comprised of rods and cones. Rods are more sensitive to light, but see shapes and not color. Cones are sensitive to color, but less sensitive to light — i.e. in darker conditions, you’re seeing more with rods than cones. You have three sizes of cones, blue (smallest) to red (biggest)…

Whether the dress appears as blue/black or white/gold depends on whether your eye has more rods or cones, and also the ambient lighting conditions in the room.”

And finally, other scientists debunking the rods and cones theory, saying that they are probably not the cause of us seeing the colours differently, but rather how our brains interpret what we are seeing:

“We are always making decisions about the quantity of light that comes into our retina. In the case of the dress, some people are deciding that there is a fair amount of illumination on a blue and black (or less reflective) dress. Other people are deciding that it is less illumination on a white/gold dress (it is in shadow, but more reflective). It could also be that you’ve seen dresses (or fabric) with the same texture or shape before, which could also affect your perception.”

That could explain why some people have said that the colours have changed from one to the other after viewing it numerous times. Perhaps simply because they’ve been told it’s another colour?

Why none of that matters

Okay, so this still doesn’t solve my designer dilemma. Even if the dress is actually blue and black, that doesn’t mean that a photo of it is representing the actual colours. It doesn’t mean that people aren’t seeing what they think they’re seeing. How many other things are we humans seeing differently on a daily basis?

Think about that for a minute. We could spend all day arguing about what is “right” and “wrong”, and neither is wrong. Just because someone doesn’t agree with us, does not mean they are wrong, for what they see is completely right to them.

It’s the same way that some people are able to see beauty in something that others might not find beautiful at all.  Who are we to say that something isn’t beautiful to someone else? We all see and experience things differently depending on how our brains interpret them. Getting angry or upset isn’t going to change this. The photo of the dress is blue and black, but it is also white and gold.  Even if it might be hard to admit.

What colour do you see?