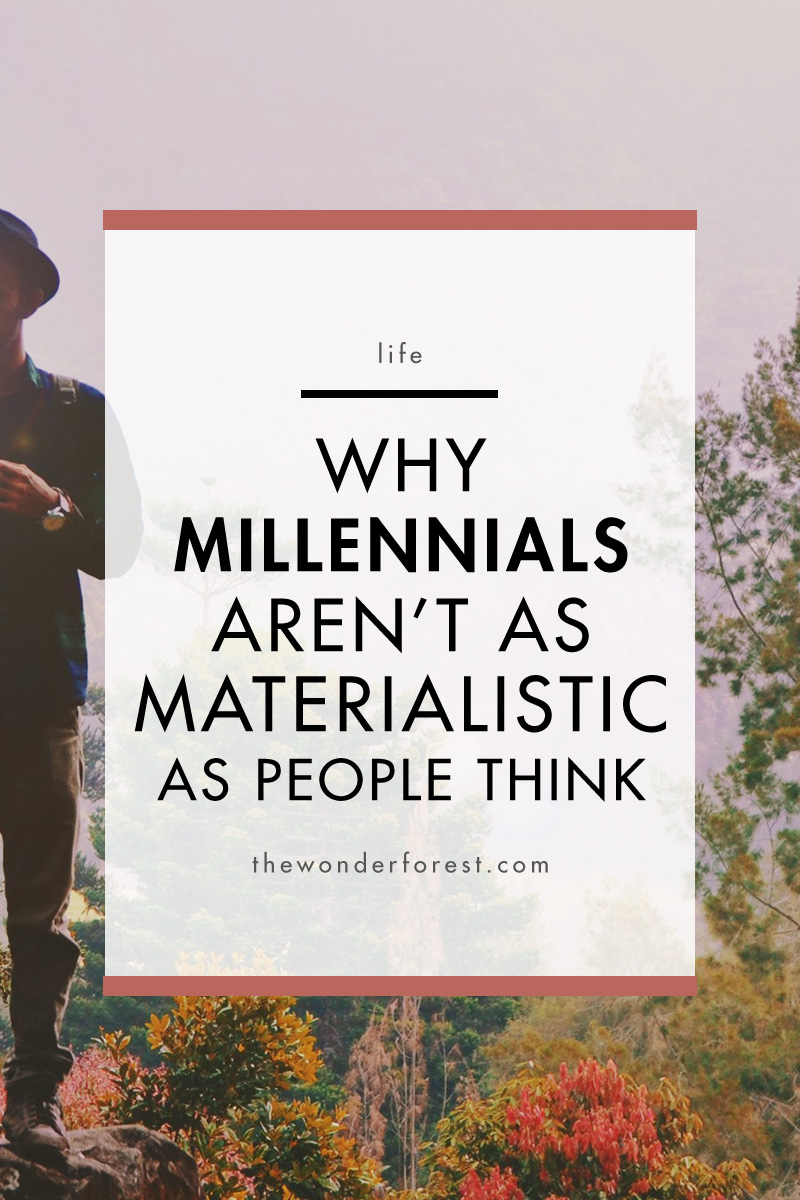 Millennials have been saddled with lots of negative associations. Lazy, selfie-obsessed and inordinately fascinated by posting photos of avocados on social media, the image of young people in the popular consciousness is far from flattering. But while older generations may have a point about the whole avocado thing (we can hardly help that though, they are clearly just delicious) probably the most unwarranted charge is that young people today are particularly materialistic.

Dubbed “Generation Me”, everyone between their late teens and early thirties is thought to care most of all about image, wealth and fame. Even worse, it’s suspected that we don’t even want to work for these things, and instead feel entitled to them because we – yes, all of us – have been terribly overindulged. Even our dominant counter-culture movement – the much maligned hipsterism – is thought to be ultimately based in consumerism, where the perfect set of clothes and tasteful tattoos offer a hollow kind of rebellion.

These are examples of extreme stereotypes, and not everyone thinks we’re terrible, but these ideas about millennials have become widely accepted to one extent or another. Yet they are for the most part unfair. The fact is, millennials are demonstrably more interested in experiences than the things they can buy.

Seventy eight percent of millennials would choose to spend money on a desirable experience (such as a holiday, gig or event) over buying a material item. Travel in particular is hugely cherished, with those who wander the globe gaining hundreds of thousands of admirers through their blogs and social media accounts. This suggests that on the whole millennials believe that creating memories, experiencing culture and spending time with loved ones is more valuable than acquiring more stuff.

It may even true to say that cutting down on possessions is a new symbol of luxury. Very wealthy young people – the kind of people for whom money isn’t a barrier when buying the things they like – are rejecting possessions and the consumerist lifestyle. The growth of the sharing economy is testament to this decreasing interest in personal ownership, with people being happy to share something – from property to cars – for short term use instead. There’s even those who are choosing minimalism because consumerism is failing to make them happy, feeling that their shopping habits are driven by a sense of dissatisfaction that they can’t simply buy their way out of.

There’s also a developing sense of romanticism around simplicity and living life authentically. For many of us, it’s impossible not to sigh and feel wistful when presented with ideas of the “off-grid” lifestyle. Self-build houses, community and quiet fulfillment are to some extent replacing the markers of the traditional aspirational lifestyle – that is, a big house, a few flash cars and a couple of swimming pools. Being out in nature is seen as especially romantic, perhaps in response to the fact that many of our lives are spent primarily in urban spaces.

The hipsterish, dreamy idealism which is driving people to value authenticity, uniqueness, exploration and travel is easy to mock but it does suggest a group of people who want a more meaningful life. It translates to shoppers making thoughtful choices and buying fewer goods (with a particular emphasis on handmade and non-corporate items), with slow fashion, the craft movement, and the unstoppable rise of “vintage” all representing this trend. Furthermore, this desire to appreciate less tangible and more important things in life may well have its roots in many people feeling anxious and alienated, leading to struggles with mental health.

Sheer practicality may also be locking millennials out of materialism as their parents experienced it. House prices have in many areas have shot up – and unfortunately, these are the kind of areas where you are likely to have to go to work. As well as being Generation Me, millennials are also Generation Rent, and the transient nature of renting our homes may well mean we are less inclined to fill them with stuff. College debt looms distractingly over the shoulders of many young people, while work appears increasingly unreliable and insecure.

Given this environment, is it any wonder that millennials have decided to take advantage of the lack of strings and increased personal freedom that not being tied to possessions represents? “Going travelling” may have taken on the slightly smug air of over-Instagramed self-satisfaction, but for many utilizing the opportunity to work remotely and see the world is a sensible and fulfilling decision. It all comes back to an appreciation for experiences, and how living a happy and meaningful life is about creating, sharing, and capturing memories rather than spending every spare moment shopping.

The kind of foibles our generation can be charged with apply to every new wave of young people, with a little bit of self-obsession having infected every teenager and young person since the dawn of time. While we may not have the revolutionary spirit of the 60s, or the punk attitude around in the 80s, it’s important to remember that our rejection towards mainstream materialism was co-opted by market forces and sold back at us at unprecedented speed.

Despite this, millennial choices reflect a group of people who are as concerned about the world as any previous generation. They often go out of there way to make the most ethical purchase, spending more on sustainable options and wanting something real, made by a real human in an authentic manner. We want fewer, more meaningful objects, and aim to ensure that the bulk of our money goes on spending time with people and experiencing new things. If anything, this suggests a generation that is moving away from materialism, not consumed by it.